skip to main | skip to sidebar

The Milford track is described as the 'greatest walk in the world'. While there is obviously a fair degree of hyperbole here, it was clearly the best hike we've ever been on.
A big part of this was the amazing weather we enjoyed. The region where the track is located is the second wettest place in the world, raining 2 out of 3 days and well over 20 feet a year. Two weeks before we were on the track it had rained so much that the water on the track was over four feet deep - again on the track itself, not in the innumerable streams running through the region. We however had rain for the first 20 minutes of the four day tramp and then amazing, unbelievable blue sky the rest of the time. Lucky!

The track starts off in a relatively flat river valley and we enjoyed tramping about for ~12 miles along the easy track with great views of the mountains towering 4-6ooo feet overhead. The valley was very narrow and the mountains extremely steep and snow capped - great! 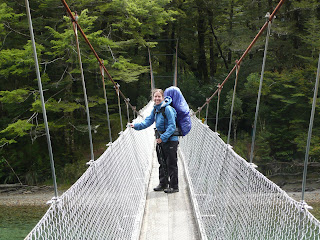 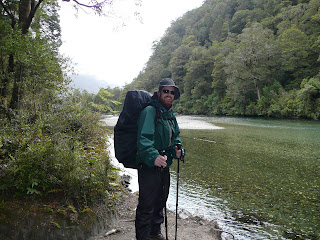 Both pics above are taken on the first day right at the beginning and the only time we needed rain gear! Julie is crossing the first of nine swing bridges on the tramp while Dan is hanging out by the Clinton river that we were to follow for the next day and a half. 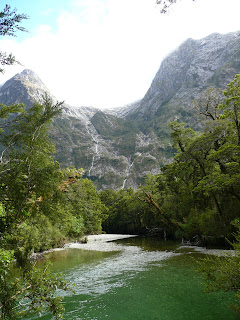 Just one of the amazing views we enjoyed that second day as we walked up the valley - lots of waterfalls, a gorgeous river, and tall mountains. 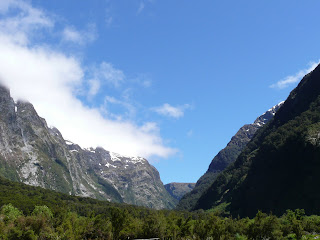 The pic above looks toward the head of the valley and in the middle distant shows the relatively low and flat Mackinnon pass (which we were soon to conquer!).

Starting at the end of the second day we began to go up to the top of Mackinnon pass, the highest point on the track at a little over 3000 feet. Being masochistic lunatics we decided to go to the top of the pass on the second day (after hiking 10 miles earlier in the day) because the weather was gorgeous and the forecast for the next day was for clouds. We love alpine scenery and we would have been seriously bummed if we missed out on what were supposed to be amazing views.
So we climbed straight up for 2 hours on tired legs to the top of the pass (knowing that we were going to have to not only climb down but repeat the whole thing the next morning). However, we were rewarded with the most stunning scenery we have ever seen. 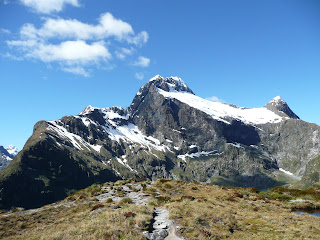 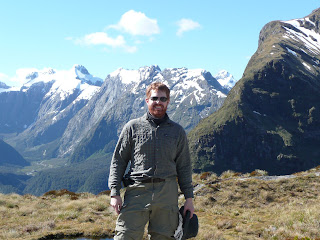 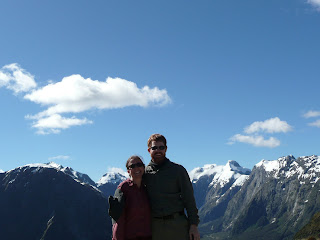 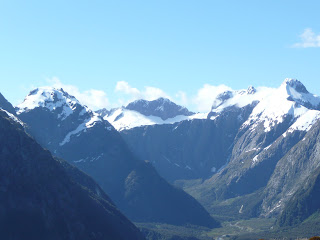 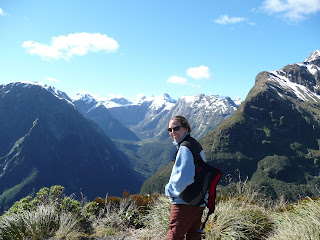 After basking in the glorious view and our accomplishment for tackling the pass, we headed back down. On the way down we were lucky enough to see (and not just hear) an avalanche falling from a safe perspective. This was cool and came on top of experiencing a relatively large earthquake earlier that morning. The quake happened at 5 am, was 5.9 on the richter, and was centered nearly directly below us. Strange that our first big quake happened not in San Fran but in the middle of NZ wilderness. No damage done but Dan was not feeling too secure in the top bunk as the building shook while Julie was happy that Dan would take the brunt of anything falling from the ceiling as she was safe in the bottom bunk (nice). Quite a wake up call!

By the end of the second day we had hiked over 15 miles in one day, 10 of them with packs, and frankly could barely move (at least Dan). Unfortunately, the next day we would have to tackle another 10 miles, not to mention the pass for a second time. Doh!

The good news was that while the clouds forecasted were there, they did not totally obscure the view. In fact it was a best case scenario, the same view was transformed into something just as beautiful but quite different. Sublime! 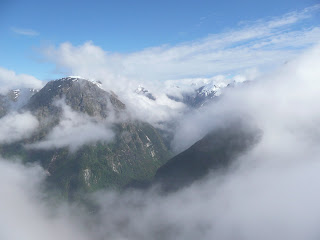 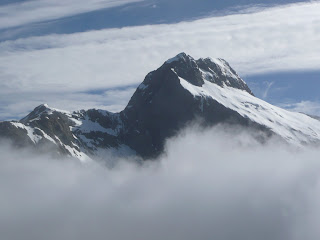 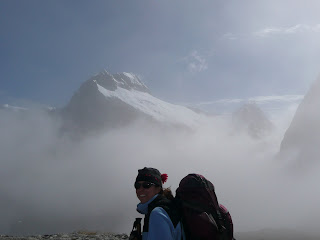 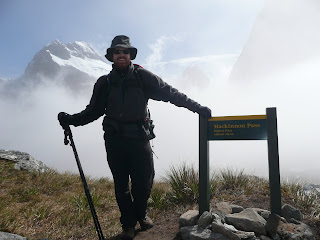 Dan standing at the actual high point of the hike amidst the clouds and mountains. 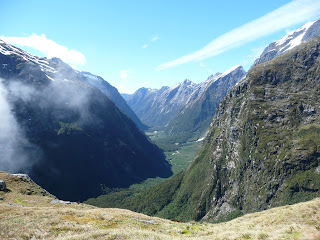 Above is a view back into the Clinton valley where we had walked the day before - essentially the reverse of the image above showing the Mackinnon pass in the distance.

After the tortuous climb down from the pass, we manged to drag our aching feet and knees toward another highlight of the track. At 1904 feet, the Sutherland falls is the fifth (or third?) tallest in the world. After a brief side trip, we managed to get to its base. Wow! Being an idiot, an evidently a friend of an idiot, I copied my buddy Dave who had done this all a few years back, and decided to walk behind the massive falls. After scrambling over soaking wet moss covered rocks designed explicitly to trip you up, I managed to get right next to the falls. By this time I was beyond soaked by the tremendous amounts of mist flying up - ah well, hopefully the pic from the waterproof camera turns out. I managed to extricate myself without incident and only felt a bit of a fool as I stumbled on back a few miles in wet clothes. 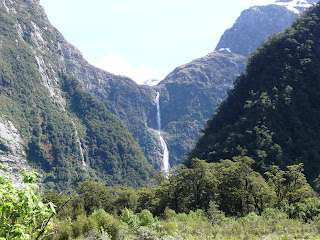 Sutherland from a distance - hard to imagine but those falls are close to 2000 feet high!

For our final day we had yet another 11 miles to hike but were blessed with another great day. We were carried along by breathtaking views at every step - plus the knowledge that after four days we were getting ourselves to a shower, beer, fried food, and all the other delights of civilization. 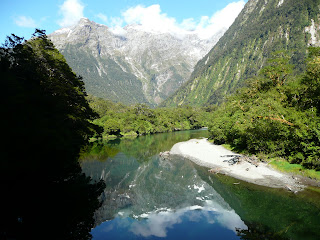 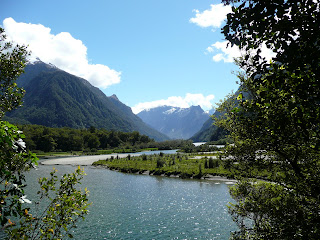 A view from our lunch spot looking over the Arthur river. Not bad! 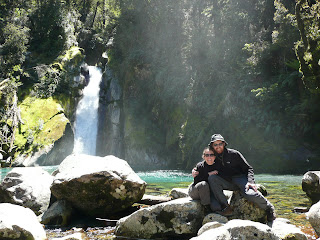 Yet another waterfall but a pretty one that served as a great resting spot before the final push to the end of the track.

So our guidebook indicated that the track was 33 miles long. When we finally reached mile marker 33 therefore we were overjoyed - we had done it! Assuming the boat dock was simply around the corner we allowed ourselves time for some victory dancing over the mile marker - take that milford! 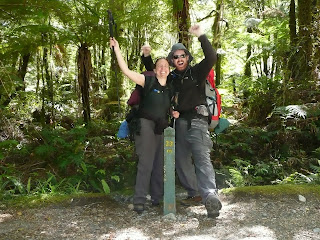 Unfortunately, the track has a bit of a sense of humour (or maybe just didn't like Dan's dancing). The track actually ends at 33.5 miles - and after thinking we were done it was one of the toughest dang half miles on the track. Ouch our aching feet!
Regardless, we of course managed to reach the true end of the track. You can see us below a bit less enthusiastic than at the previous mile marker! 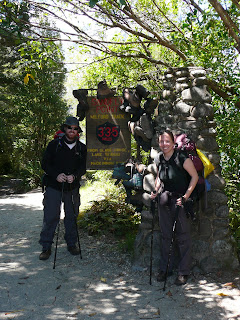 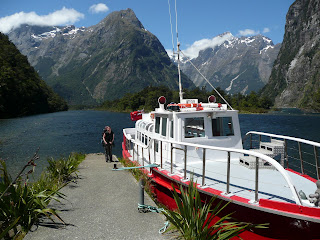 Finally we boarded an old boat to take us to the Milford Sound wharf. You can see Julie above and know that she was thinking - enough with the dang photos, let me sit down!!!
Posted by Dan and Julie at 4:41 PM

Wow! those views are great! I wish we could also do something like this at some point. have fun..
-Ashish

I am walking the Milford Track early next year and am a little worried about the swing bridges! Are they all as shown on your blog? Are there any that are less stable or just made of wire? Thanks so much for your help!

Dan and Julie
We are in our late 20's, have been married for a little over a year, and met at Bates College. After living in Boston for 3 years we moved out to California so Dan could attend Stanford Business School. No kids yet, but we do have one very big cat named George. 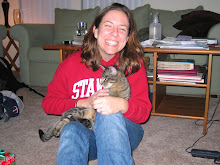